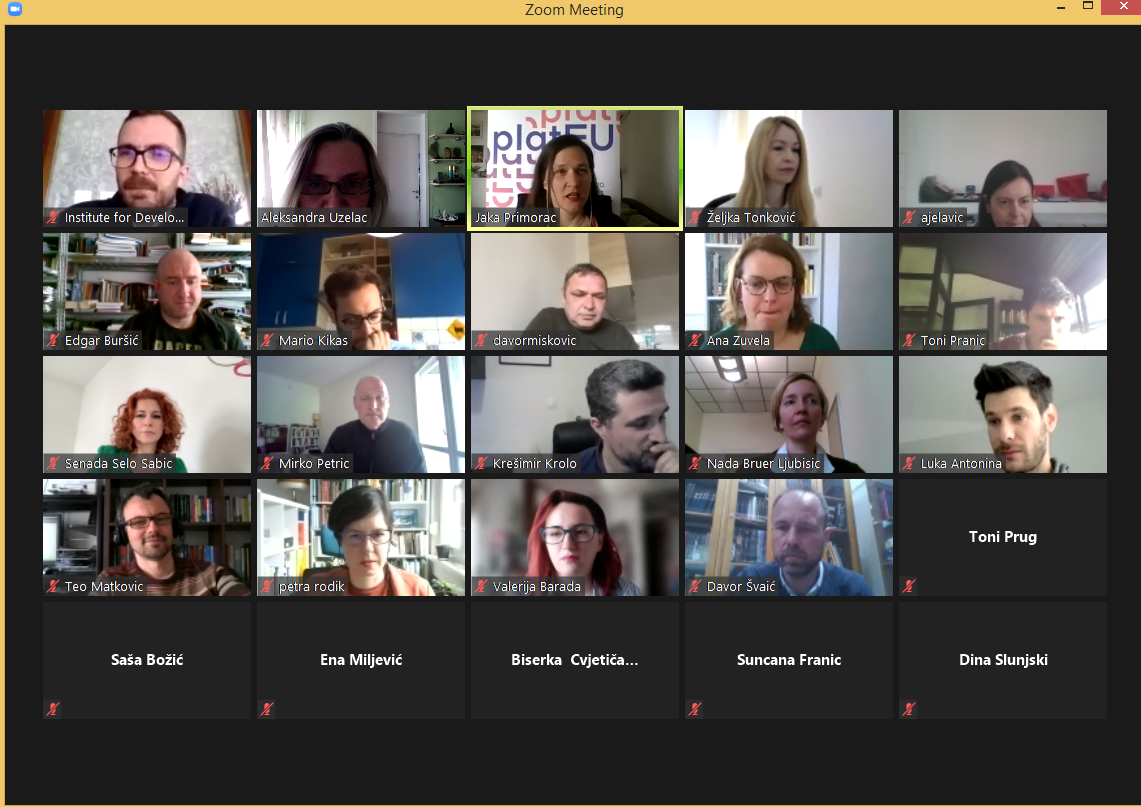 The kick off meeting of the two-year Jean Monnet project entitled ‘European Union Policies and the Platformisation of Cultural and Audio-visual Sectors – platEU’ co-funded by the Erasmus+ Programme of the European Union was held online on Monday, the 26th of April 2021 from 11:00h to 13:30h. It was attended by over thirty participants from different parts of Croatia: from policy makers, cultural workers, researchers and students of cultural studies. The first part of the meeting was used to present the thematic framework and the aims of the project, as well as in introducing the Organisation Board and the project partners. The second part of the meeting was used to discuss the research results on the online survey on the digitalisation of culture and cultural practices during the pandemic.

Kick off meeting was opened on behalf of IRMO by Aleksandra Uzelac, PhD, Head of the Department for Culture and Communication, while the project was presented by Jaka Primorac, PhD, platEU project coordinator who also introduced other members of the Organisational Board. In the continuation of the meeting the following representatives of partner organisations discussed the future project cooperation opportunities: Valerija Barada, PhD, Head of the Department of Sociology, University of Zadar; Nada Bruer Ljubičić, MA, Executive Secretary of the Interuniversity Centre in Dubrovnik; Davor Mišković, President of the non-governmental association ‘Drugo more’ (Other Sea) and Davor Švaić, Associate Professor at the Department of Editing and the Vice Dean for International and Institutional Cooperation of the Academy of Dramatic Arts (ADA) of the University of Zagreb.

The second part of the meeting was used to present (for the first time to the Croatian public) the results of the online survey entitled ‘Culture in lockdown: Patterns of cultural consumption in the age of pandemic’. The research results were presented by Željka Tonković, PhD and Krešimir Krolo, PhD both working as Associate Professors at the Department of Sociology of the University of Zadar, whose research also stimulated lively debate until the end of the meeting.

The full report form the meeting can be found on the following link. (In Croatian only).